Bye bye Melbourne, Hello new adventure! the 20th of April we drove of to Sydney. We

packed all our stuff, put it in the car and drove off. Well really slow and relaxt, we are driving like 2/3 hours a day. Our first stop was Lakes Entrance, a pretty quite place, with a peacefull lake with black swans.

Our second stop was Eden, a small town, our campsite was just next to the beach. We did a small walk over the beach, seeing the fisherman catching some bait, children playing with their kites. After diner we to the entertainment room to watch some youtube videos and went to bed really early, because I had a horrible headack.

The next day we headed off to Narooma, where we put up our tent on a beautiful spot with a great view over the beach and ocean. I saw the waves and directly thought about surfing, so I put my wetsuit on and went to catch some waves. However, when I was in the ocean, I felt the strong rip current, the sea was pretty rough and I thought I saw something in one of the waves, probalby a seal but I didn’t feel comfortable so I went out of the water. We decided to play some cards, and some parots came over, the were even eaten grapes from our hands. And just before dark we went to the harbor to spot a small group of seals, really cool to see them in their own environment instead of the zoo, but they stink, unbelievable. 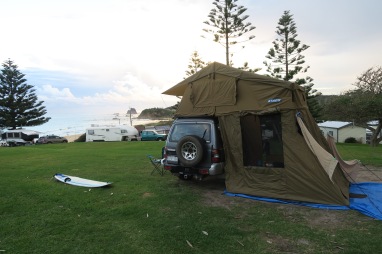 Cudmirrah the next destination, we wanted to see some wildlive and we saw pictures on wikicamps with kangaroos. Before we set up the tent we went to some of the beaches close to the campsite, checking for some surfspots, unfortunately without luck. Later on we put up our tent and put the barbie on ‘fire’. We made some burgers with sweet potato and some vegtables.

Kangaroo valley, the place if you want to see wombats. Wombats are like really big rabbits that do not jumb. They care there babies in their pouch same as kangaroos. You can only find them in Tasmania and South East Australia. It was our last change, and yeah we got lucky. We saw heaps of Wombats. The funny thing about wombats is that if they feel itch they scratch their backs on the car, which really makes your car shake, It was a great experience though.

Our last stop before Sydney is Corrimal, a small place close to Wollongong. We arrived and made hotdogs for lunch, dellicious. The campkitchen was really modern and tidy, that evening we spend some time on our laptops and took some time to call my buddies from back home.