A couple of days later we arrived in Little Dessert,

a small place above the Grampians. We actually did not know what we possibly could do here. When we arrived nobody was there, we only saw a huge emu, we walked to the reception and a woman came up to welcome us. She said: ‘I see you guys already met George, the emu’. Well, we checked in, put our rooftop 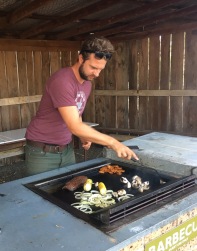 tent up and did a little hike. During our hike, we saw an echidna, which is hedgehog with poisoning needle. That evening we planned a barby (Barbeque) while we were cooking George came over and tried to steal our corn. We had to scare George
away, but he was sneaking around, waiting till we finished eating in the hope we left something. During our dinner, we already saw some kangaroos jumping around, they all went to the grass to feed themselves. It’s really cool to see so many wild Kangaroos, they came really close and WOW the males are really big.

The next day the Grampians was on our schedule, we drove down for a couple of hours, We arrived at a pretty cool campsite, at the northern part of the Grampians. The owner of the campsite showed us a couple of nice hikes, so an hour

later we drove to on of the hikes, it was pretty hot, we put enough suncream on, and started the hike. Lisanne had, unfortunately, suncream in her eyes and couldn’t see very clear, so after half an hour we decided to go back to our car. When we arrived at the car, I saw the car was standing askew.  I really hoped I parked in a small whole, but NOO, I got a flat tire (and we didn’t have a proper spare tire). We called the owner of the campsite, he wanted to help us out and came over and put the tire off and drove us to a mechanic. They repaired the tire and replaced our improper spare tire. We went back to the car, put the tires on again and had a beer with the camp owner. A really nice guy. The actual reason that we have got a flat tire was because we must have driven over a sharp stone on the gravel road to the hike. Hopefully, it will never happen again.

The next day it was time to do some hiking 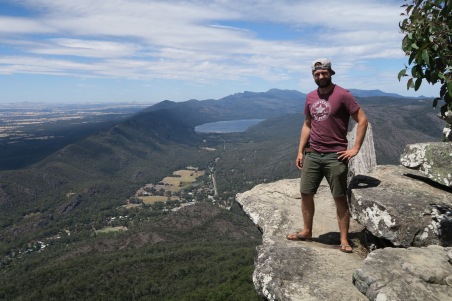 And last but not least we went to the Mackenzie Falls. It’s a 20 minute walk to go down to the falls and it is definitely worth it. Take some food and have a great lunch. You can do a hike as well, I did that with Pim last time in the Grampians, we saw the red belly snake and the eastern brown
snake. So be careful, but the Mackenzie Falls are breathtaking, it’s such a gorgeous place. 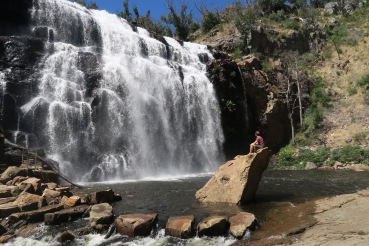 We booked a great campsite in Halls Gap, which is owned by Dutch people. The cool thing is that during the night the Kangaroos eat on the campsite, you can really hear them jumping around your tent. Really cool if you’d ask me. One night Lisanne and I were brushing our teeth, when we were walking back to our tent, two huge kangaroos were standing on the path, we had to wait for a couple of minutes to pass. During the day the kangaroos were chilling in the grass, and stayed in the shade to stay cool. 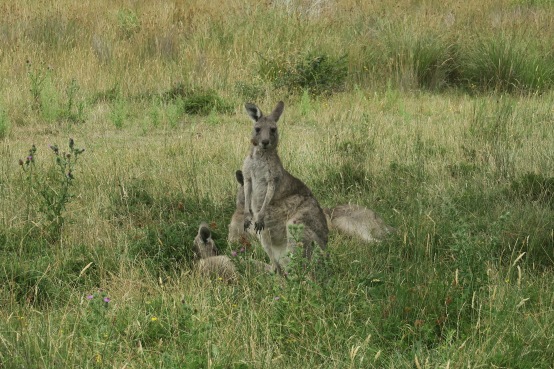 From the Grampians we drove over the Great Ocean 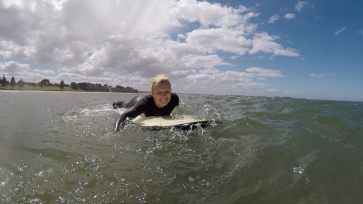 Road and went to Torquay, because it was time for some surfing :). Well, actually I wanted to learn Lisanne how to surf. So we rented a 8inch Soft board and went to the beach. The waves were really good for learning. It was so much fun to see Lisanne catching some waves and seeing her falling off
her board. It was heaps of fun. Hopefully soon we will surf again.